I thought it was about time for Bree and I to go on a date and I decided to surprise her. So, San Jose here we come… 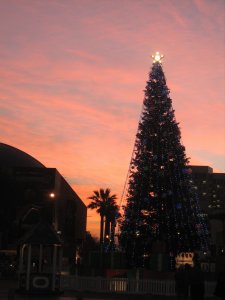 San Jose has a great Downtown Christmas-in-the-Park and so after a dinner, that was our first stop.

We rocked the rink and tested our skating legs.

Then as we were walking to the car to “head home”, and we walked by a concert hall and Bree saw the sign… RELIANT K/SWITCHFOOT show! She pretty much lost it, so I pulled out of my pocket two tickets… She was just a little excited!

Reliant K even made it SNOW INSIDE the concert hall!

But to make it better, Bree and I we’re talking about how cool it would be to meet switchfoot because Bree’s aunt is very close with the lead singer and lead guitar in the band. We would have a conversational in! About 1 min after that conversation, a lady came up as asked us, “You wouldn’t want to meet Switchfoot would you?” We pretty much died in front of her as she handed us the backstage passes!!!

Ya it was amazing! AND! They completely knew Bree’s Aunt! She only mentor’s Tim’s (Lead guitar) wife! Just crazy! Then when we got home, we got online to contact Bree’s mom in PNG, she told us all we had to do was tell them about Bree’s parents! Bree’s mom WORKED for Switchfoot in their early days, and Bree’s dad helped John (Lead singer) put in his Jacuzzi!

What a fun time out!

One Reply to “Christmas in San Jose and a Concert to boot!”